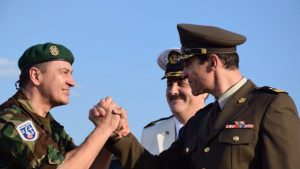 Ever since it premiered at last year’s Pula Film Festival, Antun Vrdoljak’s General continues to raise many questions; the first one was regarding the production costs of the biopic about general Ante Gotovina, and then there were many wondering about the number of people from the Vrdoljak (extended) family on the closing credits, the controversial director’s capability of managing a project of such magnitude in his late years, the possibility and the impossibility of General getting its victory dance in Pula, various ideological and historiographic aspects of making a biopic, and about everything which remains unspoken as well as any ideological interpretations therein… However, after General was broadcast as a TV series, running almost simultaneously on the first and third channels of the Croatian television, HRT, the real question seems to be this: is there, in fact, such a thing as a state-building narrative in Croatian cinema?

According to many online news sites, the General series has united our country–mainly because all of Croatia is shaking with laughter. The age-old question among Croats, ‘Where were you in ‘91?’, now had a new answer; ‘At Kaufland’, owing to Kaufland’s billboard being visible in one frame of Gotovina’s arrival to Zagreb during the war in 1991. (The German hypermarket chain Kaufland would open its first store in Croatia somewhat later, in 2001, and in Karlovac.)

When my colleague Nenad Polimac compared Antun Vrdoljak’s TV series to a popular Croatian soap opera, Lara’s Choice (Larin izbor, Nova TV, 2011–2013), Jelena Veljača, who was the screenwriter of the soap opera, took that as an insult. Vrdoljak’s ‘pseudo-nationalist’ series apparently had nothing in common with a soap opera which, during its television run, supported the LGBT community and brought feminist ideas into the public conversation, working to combat violence against women, and which praised the antifascist struggles, while criticizing the fascist nostalgia.

In short, the film and the series—which were meant as part of the fundamental discourse of the nation-building ideology in power—became a laughing stock within weeks of its theatrical release, and particularly at the time of its television broadcast. We soon had a new favourite pastime on our hands: a general cross-(social)-media search for the best goofs, while trying to come up with the wittiest and the most sarcastic comments. While, according to some estimates, more than sixty percent of the people who voted in the first round of presidential elections—which were held at the same time when the series began broadcasting—opted for one of the so-called state-building, right-wing and conservative options, the general consensus regarding the General remained – tragicomic.

No research has been done on the audience reactions to the series, so it might be ungrateful to make any conclusions about what the viewers actually thought or how they experienced the series. However, at the same time, there does not seem to exist a single comment about the film and series that would be even remotely positive, neither online, nor in any other media, including one from Ante Gotovina himself, who flouted the tradition, when he avoided praising the film crew in his opinion of the film-turned-series.

The phenomenon of the Croatian state-building narrative in feature films dates back to early 90’s and Oja Kodar’s war film, Time for… (Vrijeme za…, 1993) and the ‘dissemination of the truth about the Croatian Homeland War’, pushed forward with a number of films evaluated as self-victimizing trash or as nationalist bleak trash. This trend continued until the end of the 90’s, when Neven Hitrec came out with his Madonna (Bogorodica, 1999), a film which Vrdoljak himself was very happy with, saying that now—at long last—we had ‘a proper film about the Homeland War’. Almost thirty years after the start of the war and the formation of our state, General is here to bring the state-building discourse to its climax. And it seems to reflect all the ambiguities of the genre. On the one hand, there is an understandable need—not just by the elite in power, but also by society as such—to discuss the war and the establishment of our state, but on the other hand, there is any cinematic representation of such a hyper-narrative seems completely devoid of power.

Why such a hyper-narrative does not seem to be working for almost thirty years now is not simple to answer. Many closely interconnected factors related to its implementation and ideology come into play here. How acceptable can such a discourse actually be when it paints the nation as historically impeccable and the state as a pseudo-religious category? How efficient can the notions of propaganda as propaganda be, of national exclusivity as such, of the truth as truthful? In other words, what is up with the idea of propaganda served as a nationally exclusive truth?

Why the state-building hyper-narrative is so dysfunctional, is first and foremost because our time is up for hyper-narratives. The time is also up for Stalinist epics and Maoist film operas: the Russian national discourse of today entails action films, while China has fantasy blockbusters. Time is also up for North Korean propaganda films that used to be screened to a frantic extent across Eastern German barracks. In Croatia, though, it is as if the state-building discourse—discounting several genre films by Kristijan Milić—cannot think outside the shabby box of things done so many times before.

In the series General, everything seems fake: from the powder on Goran Višnjić’s face and awkward military actions, all the way to the statements of love to their mothers as well as their motherland. Everything boils down to sentimentality, national folklore, condescension and mythomania, and everybody just seems to talk too much. Some address the sea, some the homeland or the Almighty, and some, like Mustafa Nadarević as General Bobetko, or even Antun Vrdoljak as director-screenwriter-dialogue writer, address someone or something outside the frame, be it history, or the viewer.

It would prove too gargantuan a task to list all the goofs, logical errors and ambiguities, all the implausible, tragi-comic or simply corny and gaudy moments from the series and the film. But discussing select details, segments, plot devices or storylines of the film, or even the film as such, seems to be missing the point. Sure, we can laugh when Tarik Filipović as Admiral Davorin Domazet Lošo makes a remark about Gotovina’s Livno frontline’s plan (“It’s a sector-type modular system!”). We can describe General as a hagiography. We can discuss the film as is, with no regard to the cinematic, political and ideological context. But this is not about Antun Vrdoljak making a bad film about the Homeland in his late age. It is about the fact that a true state-building discourse has never been established that would be generally accepted and approved by canonical national cinema.